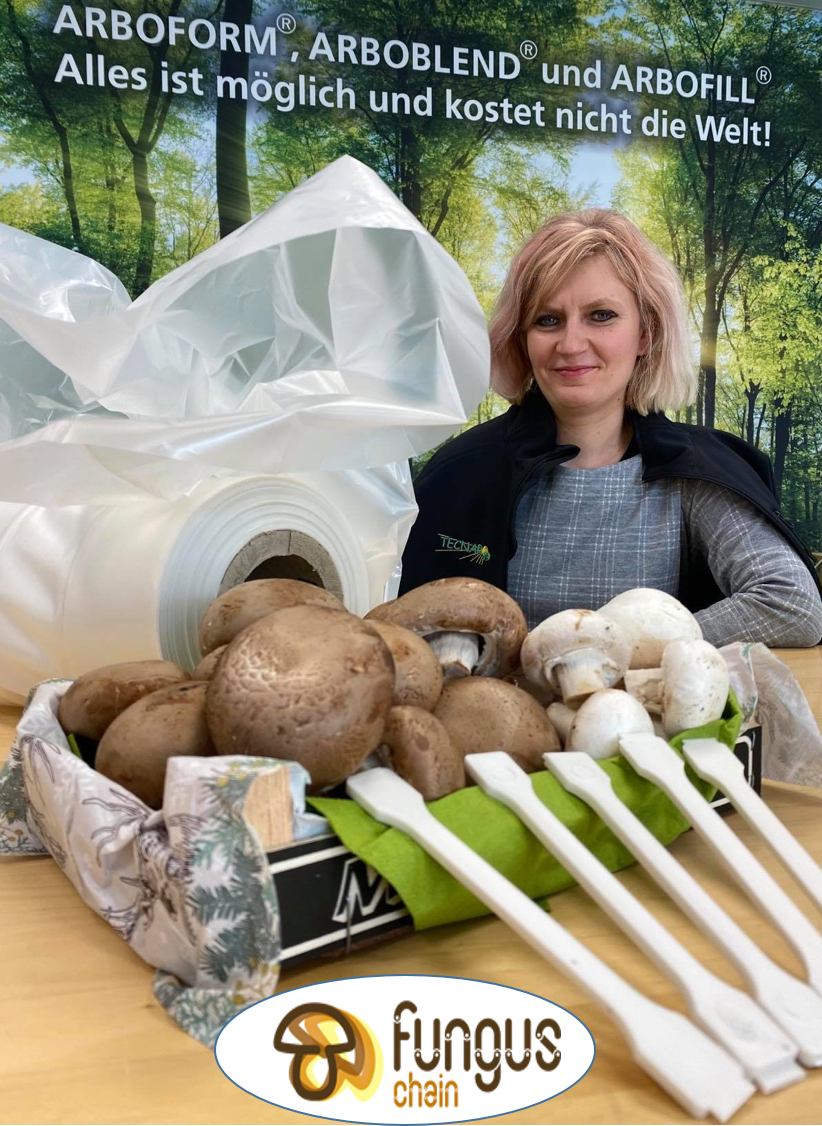 Ilsfeld – Tyholland – Zaragoza, April 14, 2021 – Did you already know that about 25 percent by weight of each kilogram of mushrooms is thrown away as waste? The stem, for example, is the part of the mushroom that is not normally recycled and sold.

By-products of mushroom cultivation: extraction of high-quality biomolecules from mushroom waste. Raw material instead of waste.

According to the GEPC (European Group of Mushroom Growers), over 1,000,000 tons of mushrooms were grown in member countries in 2015 [1], generating approximately 250,000 tons of waste. “Almost 98% of the domestic production of edible mushrooms falls on mushrooms. Around 70,000 tons were produced on 332 hectares in Germany in 2019″[2], which generated around 17,500 tons of mushroom waste during their cultivation. For laypeople and mushroom connoisseurs alike, this amount may seem surprising. However, for entrepreneurs with a bio-economic focus, several thousand tons of unused bio-waste generated in Europe per year attract very special attention, as it can be valorized and used industrially.
With the realization that this waste need not actually be considered as such, but that high-quality biomolecules are obtained through extraction, from which versatile products can later be made, the collaboration between TECNARO, Monaghan Mushrooms, Total Corbion and 13 other companies and institutes was born.

To this end, the Irish project partner and one of the world’s largest mushroom producers, Monaghan Mushrooms, has established a mushroom waste treatment center to carry out the stabilization, pretreatment and cascade extraction procedures that have been investigated at FUNGUSCHAIN. The FUNGUSCHAIN Project has focused on establishing a new biorefinery concept in order to extract molecules in four steps: cold extraction, microwave-assisted extraction, pressurized how water extraction and anaerobic digestion. Each of these phases can be parallel to the rest and implies a different extraction methodology to obtain different products.

The FUNGUSCHAIN Project has scientifically proved the wide range of possibilities and benefits that mushroom residue molecules can offer at a social, economic, and industrial scale. By using raw material, the circular economy model includes the entire value chain of the sectors involved: food, cosmetics and plastic.

FUNGUSCHAIN has studied the benefits of mushroom molecules in nutrition, since their properties can help in the metabolic syndrome associated with obesity, among other issues. Also, the addition of these molecules to certain food such as bread, sausages or instant mushroom sauce have shown very positive effects on health, being especially interesting for vulnerable consumers such as the elderly, as these molecules become a vitamin B12 supplement or source of vegan protein.

Thanks to the commitment and synergy between its partners, FUNGUSCHAIN has also developed different types of bioplastic products. Many formulations were developed combining bioplastic materials and mushroom residue (in addition to additives and bio lubricants). Therefore, a wide range of biodegradable products such as compostable garbage bags, shopping bags or films for agricultural crops have been manufactured. Particularly beneficial for plastics production is a special extract of fungal waste biomass, which could be used as a co-carbon source for the fermentation process, providing the foundation for biopolymer production.

Among the FUNGUSCHAIN participants, TECNARO GmbH from Ilsfeld in Baden-Württemberg was able to contribute and expand its expertise. As a producer of bio-based and biodegradable products, TECNARO essentially has three different product families, with the ARBOBLEND material group playing the central role in the interaction with fungal waste. The project managers Dr. Michael Schweizer and M.Sc. Erna Muks enthusiastically led the material development.
“A lot of knowledge was generated in this project, mainly involving the degradation behavior of the newly developed materials. This made it possible to understand and control the degradability by adapting, adjusting and further developing the relevant formulations,” explains Muks. “Thanks to the FUNGUSCHAIN progress, our already very flexible and multifaceted ARBOBLEND spectrum can be enriched in the future by a large number of new formulations,” commented the two CEOs Jürgen Pfitzer and Helmut Nägele of TECNARO GmbH, and further described Pfitzer: “In the creation of value from fungal waste, the FUNGUSCHAIN network has succeeded in taking a revolutionary step from which everyone can benefit. We at TECNARO can not
only contribute with our know-how, but also open up many completely new areas of application for our bioplastics.”

Regarding the cosmetic industry, the project has provided new sustainable products thanks to the incorporation of chitosan in the formulations. Thus, three types of products with 100% natural origin were developed as a replacement for chemical antioxidants: emulsions, essential oils and bars of soap.

An another variant of utilization, the remaining mushroom waste can be used to generate biogas.

FUNGUSCHAIN is a perfect example of how circular bio-economy becomes a reality. The valorization of waste represents a step forward towards the recovery and extraction of valuable materials that will be used in key sectors of the European economy.

On April 14, 2021 from 9:00-13:30 o`clock, the final conference for the FUNGUSCHAIN-project will be held online. Participants of the event will have the opportunity to learn how fungal residues can be introduced into a circular economy and what opportunities exist for industry.

To attend the final meeting, please register using the link below:
https://aitiip.webex.com/aitiip/onstage/g.php?MTID=eb2890174caa86acd8e72a8ce89a7cce6

On April 20, 2021, the FUNGUSCHAIN consortium will host a final virtual event where interested parties and end users will find a place to further follow the scientific results of the project. During this meeting, the technical fact sheets of the products will be presented and some additional information will be shared on protein powders, glucans, chitosan, lipids and polyphenols, and fermentable sugars. There will be time for attendees to ask questions and engage in discussion.

More information about the FUNGUSCHAIN-project and consortium can be found on:

TECNARO is a leading manufacturer in the global bioplastics industry and reaches the global plastics processing industry through the distribution network of ALBIS PLASTIC GmbH.

TECNARO’s work and the use of its innovative bio-materials ARBOFORM®, ARBOBLEND® and ARBOFILL® have received numerous awards to date: 1999 ZDF WISO Founder’s Prize, 2000 EuroMold Award in Gold, 2001 was the 1. Einfach Genial Preis of the MDR, 2002 award “best product” of the Material-ConneXion New York, 2007 VR-Innovationspreis Mittelstand of the Volksbanken and Raiffeisenbanken, 2008 Werkbund Label, 2009 Deutscher Industriepreis in the category suppliers, 2010 European Inventor Award of the European Patent Office, 2011 Diesel-Medaille 2011 of the German Institute for Invention and for the fourth time in a row the awards Green Brands Germany*** 2013/2014, 2015/2016, 2017/2018 and 2019/2020.
In 2019 alone, TECNARO was presented with Bio4Self at the world’s leading trade fairs TechTextil 2019 in Frankfurt, the European Bioplastics Conference 2019 in Berlin and the world’s largest trade fair for Fiber Composites JEC WORLD 2019 in Paris with the respective trade fair innovation awards.
The industry congress “Summit of World Market Leaders” honored TECNARO with the second place “Innovation Champions Award 2020” at the Carmen Würth Forum in Künzelsau, Germany.

TECNARO project manager Erna Muks is developing bioplastic ARBOBLEND®-materials based on fungal waste in the Funguschain project for film and injection molding applications. 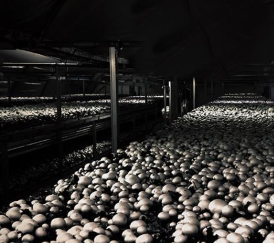 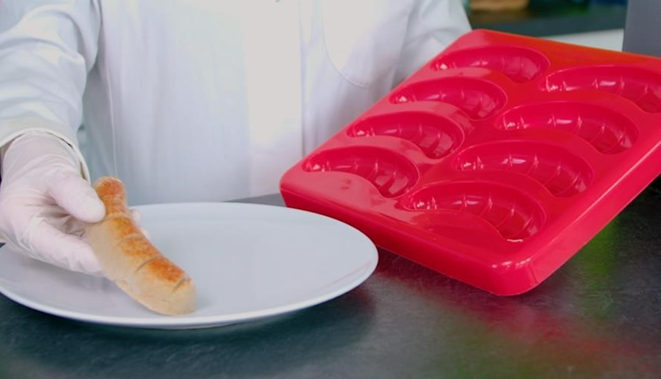 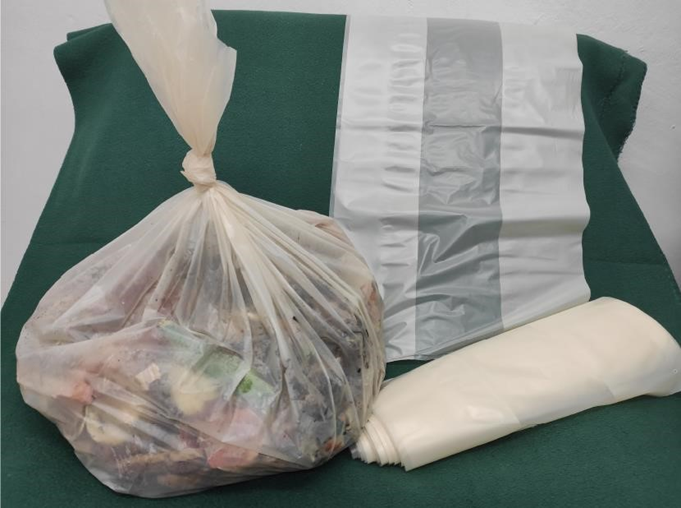 Development of a new formulation for degradable bags based on an ARBOBLEND compound (TECNARO). Blown film processing (AITIIP_Spain/Mi-Plast_Croatia) and production of bags at Mi-Plast (Croatia). 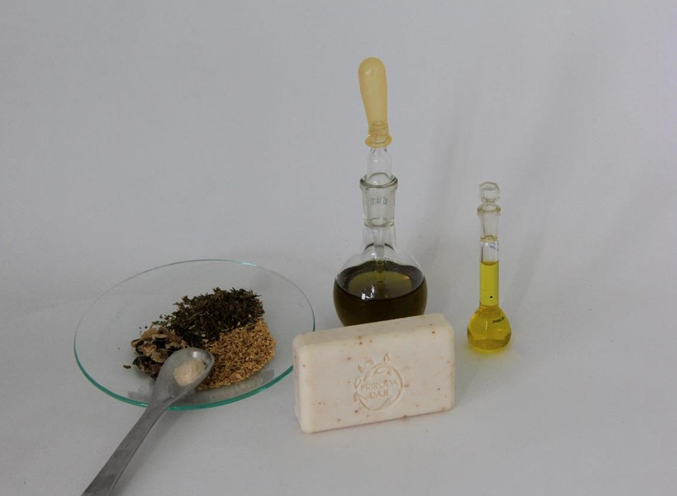 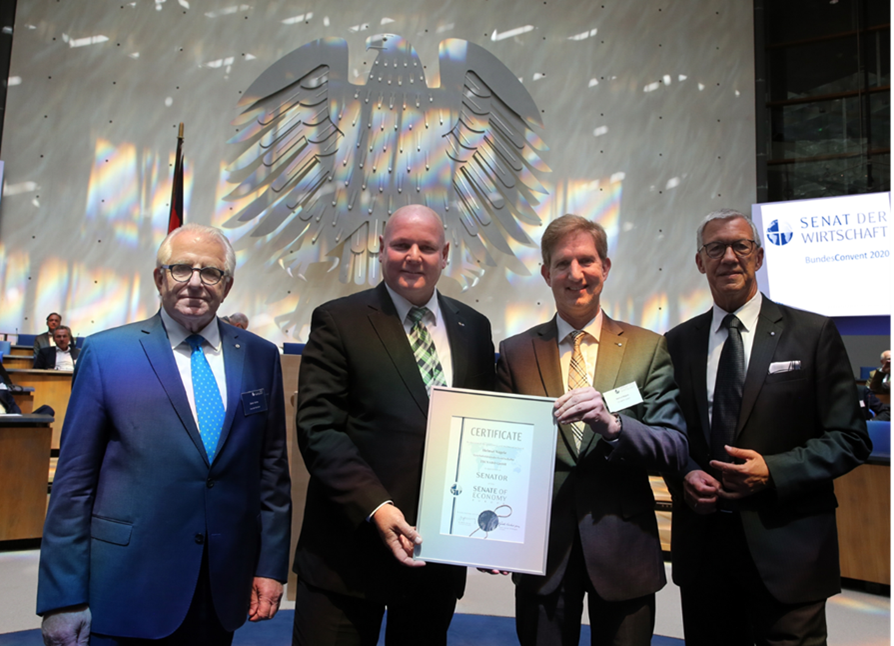 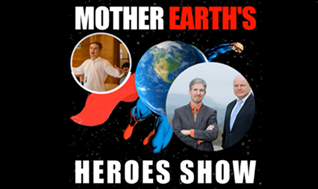 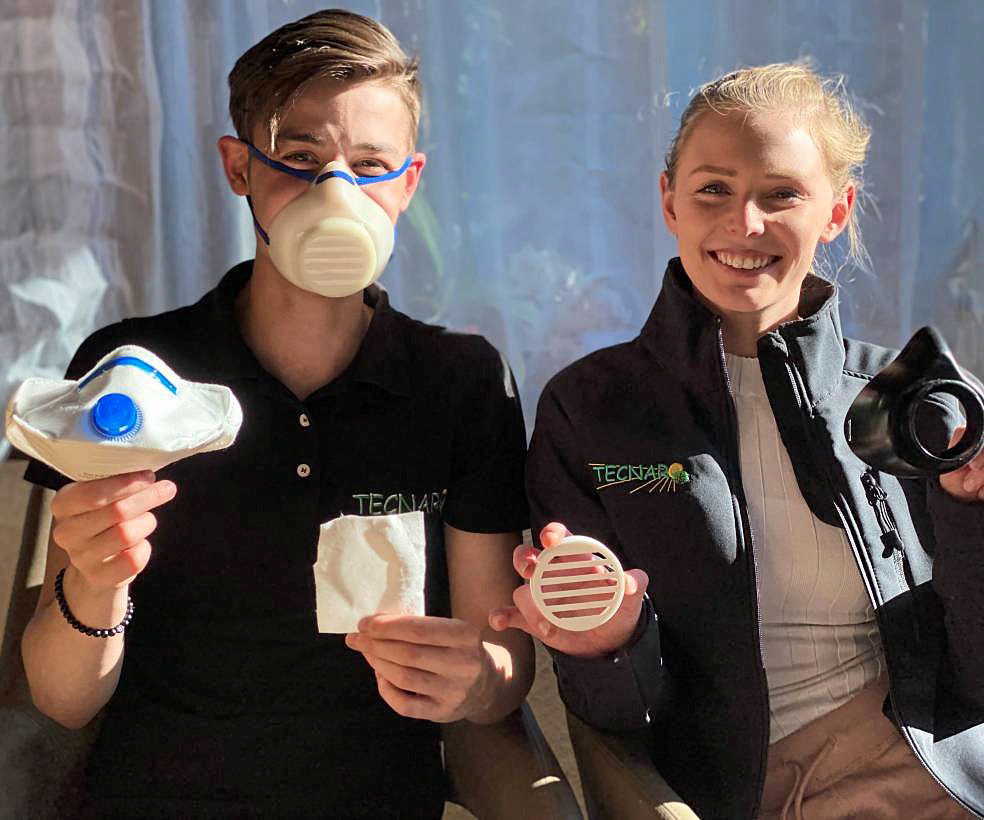 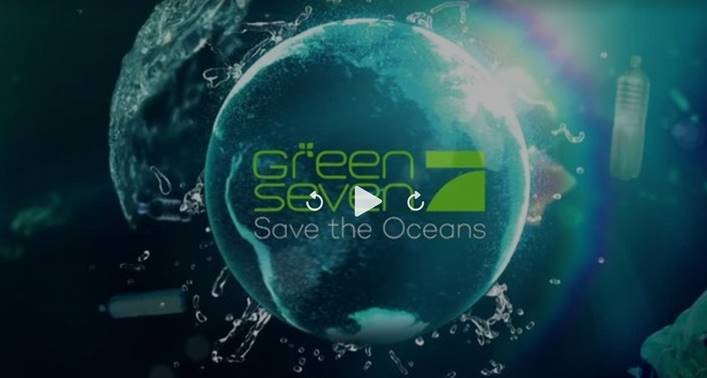 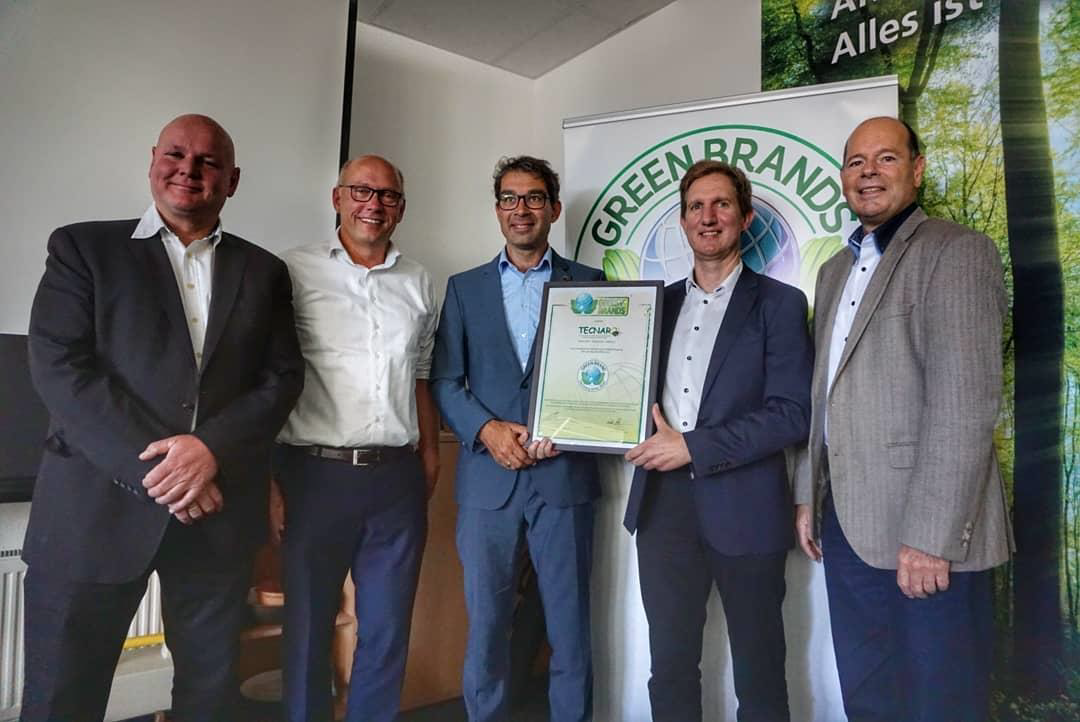 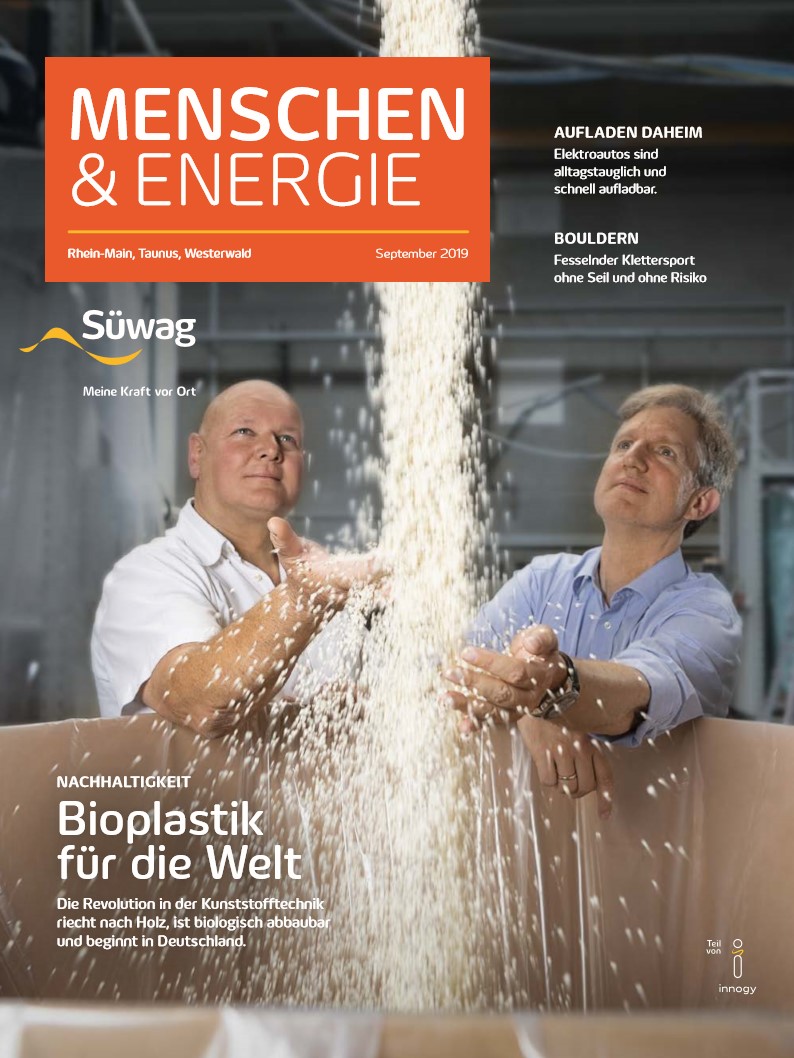 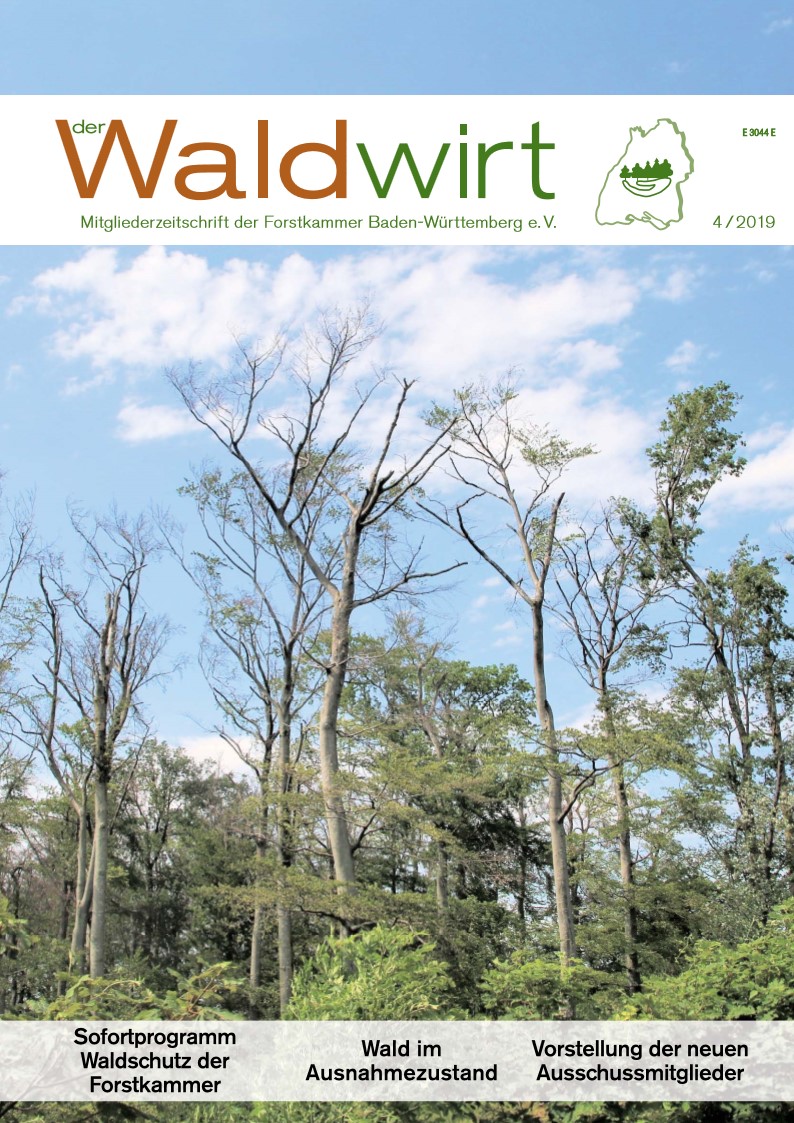